The elders of St. Ann’s Home and Wegman Care Center were recently treated to a very special breakfast – several months in the making!

Last fall, Jenna Carson, Life Enrichment Advocate, had the idea to purchase sap buckets, with a plan to tap the maple trees on the property of St. Ann’s in the late winter months. Jenna remembered all of the fun she had with her father growing up, boiling down sap over a wood burning stove, and she wanted to share this experience with the elders of St. Ann’s Community.

Jenna then enlisted the help of St. Ann’s grounds team, who were more than happy to help with this idea. Greg Cleveland, Grounds Supervisor, along with Jason Mcgowan (and many others), tapped both red & Norway maple trees, with a total of 12 taps with 12 buckets. They collected nearly 100 gallons of sap, which were then passed along to the dining team.

Pasquale Conca, Executive Chef, boiled down the nearly 100 gallons of sap collected into just 2 gallons of maple syrup – talk about a process!

When it was finally time to share St. Ann’s Maple Syrup with the residents, Jenna did a special broadcast through St. Ann’s TV to all resident rooms, discussing how to tap trees, how to convert sap to syrup, the history of maple sugaring, and also played a special syrup song perfect for the occasion (shared below in the comments section).

Thank you to all of St. Ann’s employees (there were many!) who worked so hard on creating this special treat for our residents. If you missed out on trying St. Ann’s Maple Syrup – don’t worry – the ‘Syrup Squad’ has already talked about upping their production for next year, and hope to have a big pancake breakfast for everyone to enjoy!
[/vc_column_text] 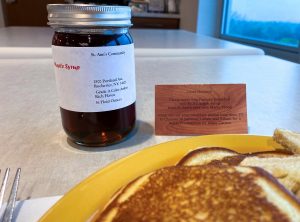