When two weightlifters get together, the conversation can get heavy.

That’s “heavy” as in 565 lbs., which Bob Cook deadlifted at the age of 16 to set a national record. Bob is now 99 and a resident of St. Ann’s Home, where he was recently visited by current weightlifter Dave Edborg.

As noted in the Monroe County Post in May, Dave, an Irondequoit resident, won first place in his category while representing RIT Public Safety in the World Association of Benchers and Deadlifters National Competition in Phoenix earlier this year. He achieved his second World and National record with a lift of 447.2 lbs.

When the two athletes sat down for a chat at St. Ann’s, they shared stories, talked about current weightlifting records, and compared equipment and techniques past and present. They found they have a lot in common.

“We both have long arms, which helps when you’re a deadlifter,” said Bob, who was thrilled to “talk shop” with a current competitive weightlifter.

The visit gave Dave a chance to hear about the early days of competitive lifting from Bob, who competed until he was 52 and trained some 2,000 weightlifters over the years, some of whom went on to the Olympics.

“He’s a fount of knowledge about the sport,” Dave said of Mr. Cook. “It was an honor to meet him, and I look forward to talking with him again.”

The two were introduced by a St. Ann’s volunteer who knew about their mutual love of weightlifting. Volunteers and staff members at St. Ann’s are always on the lookout for new ways to bring meaningful experiences to the residents they serve. 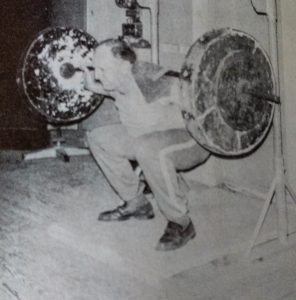